3D movies linked to dizziness, nausea, and other visual symptoms 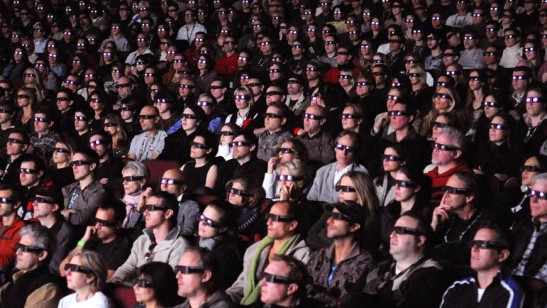 A report published today in the journal, Optometry and Visual Science, confirms what many have experienced when watching 3D movies at the theater — they sometimes cause blurred vision, double vision, dizziness, disorientation, and nausea. The researchers had participants sit at various angles and distances while watching Cloudy with a Chance of Meatballs in 2D and 3D. 21% of those who saw the movie in 3D had symptoms (compared to 12% of the people who saw the movie in 2D). 3D viewers also had increased “immersion” in the movie experience — a greater sense of object motion and motion of the viewer in space — the reason most of us would want to watch a movie in 3D to begin with.

Those who sat closer to the screen or in the center of the theater reported greater immersion and greater rates of motion sickness.  Younger viewers were found to have less blurry vision symptoms, but greater motion sickness symptoms.

Based on this study, if you get bad visual symptoms while in a 3D movie, you should sit farther away from the screen or on the side of the theater. The best solution; however, is to avoid this type of movie experience and stick to the regular 2D movies.

2 comments on “3D movies linked to dizziness, nausea, and other visual symptoms”

This entry was posted on August 13, 2012 by visionmd in The Eye and tagged 3D film, 3D movie, Blurred vision, Cloudy With a Chance of Meatballs, Motion sickness, nausea, Vision.